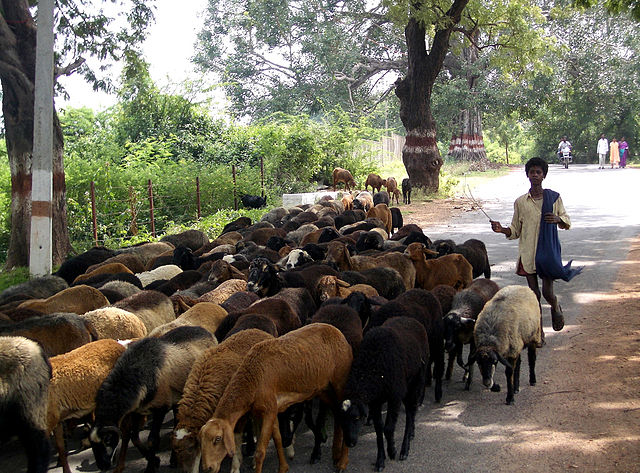 We continue with our cattle handling tips, giving you valuable information on animal behavior. In our previous blogs, we have discussed the importance of stress free cattle handling and understanding cattle behavior for leading cattle in pasture &rotational grazing safely. This article will specifically focus on handing cattle, sheep, pigs and other herding animals using their “follow the leader” instincts. As discussed earlier, when you have a herd of animals that are new to your farm, you will have to spend some time with them to get yourself acquainted with the animals. Once you understand their behavior, it will become easier for you to handle them safely and in a stress free manner. We have also talked about using the flight zone principles to control animal movements. Now, here are some tips on how to use “follow the leader instinct” to Improve animal handling.

“Follow the leader”instincts are strong in flocking animals in a herd. Animals with a higher level of intelligence and those who dominate a conflict situation will usually become the leader of the herd. An animal taking this role is called a “control animal”, and behavior of this animal will determine the behavior of the herd as a whole. 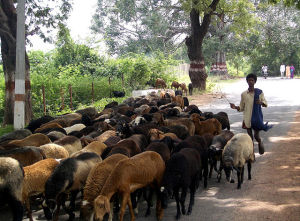 Animal handlers can easily take advantage of this natural “Follow the Leader” instinct of animals and move animals in and out of the chute (race). Animals will move more easily if there is enough space in the chute to take advantage of this of following behavior. An animal handler will usually find that it is a lot easier keeping up with the line in a large ranch, slaughter plant, or feedlot, once the handler learns to use this method, as animals will move right up the chute as they enter the crowd pen.

It’s recommended that you never fill your crowd pen more than half of its capacity. Overloading the crowd pen will make it difficult for animals to turn. The crowd pen works most efficiently when used as a “pass through” pen so that the animals can enter the single file race immediately.

Powered gates should never knock animals over or drag an animal which is knocked down on the ground. All automatic doors should be equipped with controls that the handlers can stop movement if needed.

Domestic animal herds are easier to control and may act differently than the wild herd of the same species of animals, due to their history and composition. Humans can easily control the herd by placing a control animal as the leader of the herd, and only need a ribbon and stick to turn and guide the animals in the desired direction. Cattle move more easily if small bunches of animals are moved in the pen without overcrowding it. 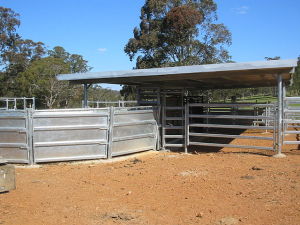 Most cattle will move easily when enough room is given, and the pen gate should not be used for pushing animals. Some stubborn animals might need to be separated and treated differently from the rest of the herd.

This is a stress free way of moving cattle in and out of the chute (race). Avoid yelling and waving. The stick with ribbon should only be used to guide animals gently. Animals will stop moving into the crowd pen if they see something ahead of them.

We will return with more tips on animal handing in our next blog, so keep reading our blogs. Also please add your comments below and let us know if you’re finding our tips useful.